Josh Cotter, Ph.D.  Dr. Cotter has a Master of Arts degree from the Division of Health and Exercise Science at The Ohio State University under the mentorship of Dr.Janet Buckworth.  The title of his Masters thesis was “Anthropometric, strength, and flexibility characteristics of preadolescent competitive gymnasts.”  Dr. Cotter continued his education at The Ohio State University where he completed his doctoral work under the guidance of Dr. Steven Devor.  During the past two plus years, Dr. Cotter has been working under the guidance of both Drs. Adams and Caiozzo.  Specifically, Dr. Cotter has been focused on two projects, which are both related to muscle growth/atrophy.  The first project looks at the effects of a novel flywheel exercise device utilized as a countermeasure for the loss of muscle mass associated with microgravity and disuse (see Figure 14). Under this project, Dr. Cotter has successfully completed three separate phases regarding the efficacy of this device. The first phase examined the ability of this unique exercise device at increasing the strength and size of several muscle groups of the leg as well as handgrip strength and endurance. Twelve subjects completed the full protocol.  Dr. Cotter presented the data at the 2011 Experimental Biology Meeting and at the 18th International Academy o(Astronauts Humans in Space Symposium. 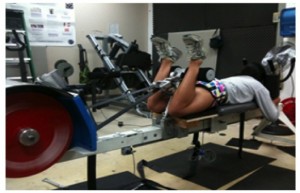 The 2nd phase of experiments included a model of disuse known as unilateral lower limb suspension or ULLS.  This human model of disuse utilizes standard crutches that allow for one leg limb to be unloaded, providing a similar physiological response to that seen in a microgravity environment. Dr. Cotter recruited 28 subjects to complete this phase of the study which included having each subject complete up to two weeks fully oncrutches along with 4 total muscle biopsies each. Data from this phase of the study was presented at the 2012 Experimental Biology and American College of Sports Medicine annual meetings. 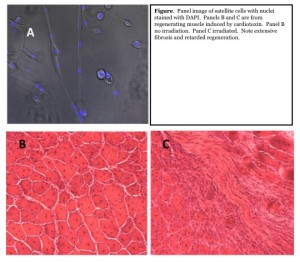 The thirdphase, a pilot study looking at the effects seen with detraining following a rigorous 5 week training program, was completed in the summer of 2011 utilizing 15 subjects.  This study was designed to mimic the environment that astronauts are placed in before and early after launch into a microgravity environment.  Collectively, the findings from this study have played a critical role in developing a NASA proposal that was funded to explore the efficacy of this device in preventing the loss of muscle mass during simulated flight, using a bed rest model. Should these experiments be successful we believe that this exercise device will be fast tracked for use on the International Space Station.  Dr. Cotter’s second project relates to the biology of the satellite cell, a muscle precursor cell. Throughout the last two years, Dr. Cotter has learned how to isolate satellite cells from both rat and mouse models.  Additionally, he has developed a cardiotoxin model that stimulates massive proliferation of satellite cells, and is now using this in vivo approach to complement the in vitro studies he has ongoing.  As noted last year, he is combining these approaches with a mitochondrial targeted catalase utilized in a transgenic mouse model.  He will have a manuscript submitted short to the Am. J. Physiol. describing this exciting work that has direct applications to NASA and cancer patients.  Ultimately, the goal is to understand if irradiation negatively impacts the effects of exercise on the maintenance of muscle mass.  As noted in several other places throughout the grant proposal, Dr. Cotter has taught part-time at Cal Poly Pomona and was recently nominated as the finalist for the Cal Poly Pomona 2013 College of Science Distinguished Teaching Award . 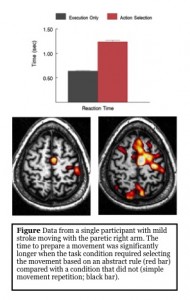 Jill Stewart, Ph.D., RPT.  Dr. Stewart received her clinical degree in physical therapy from the University of Evansville in 1995 and completed her PhD in Biokinesiology at the University of Southern California in August 2010. She began her postdoctoral training at the University of California, Irvine with Steven C. Cramer, MD in October of 2010.  Dr. Stewart’s training focuses on the neural correlates of motor preparation in individuals with stroke.  Task-oriented exercise for the purpose of directly improving the performance of everyday functional activities is an important component of rehabilitation.  While a fair amount of research exists on the execution of skilled actions after stroke, little is known about the behavioral and neural correlates of motor preparation, a key component to the performance of skilled motor actions.  Her current research is investigating how individuals recovering from stroke engage the brain during the selection of a motor action, a process shown to engage dorsal premotor cortex among other secondary motor regions in healthy individuals. Additionally, she has been investigating how the recruitment of dorsal premotor cortex during action selection predicts the acquisition of a novel motor task that requires this process.  Outcome measures include markers of movement, structural brain integrity (stroke injury to white and gray matter), and brain recruitment during task performance (functional MRI).  Her work is targeted at individuals who will optimally respond based on clinical presentation, the anatomy of the stroke injury, and the recruitment of neural resources.  As noted above, we are excited to report that Dr. Stewart has been offered an Assistant Professorship in the Department of Exercise Science and the Program of Physical therapy as the University of South Carolina.  She is expected to begin her academic career there in January 2014.

Lori Wilson, Ph.D. Dr. Wilson received her Master of Science degree from California State University of Long Beach in Exercise Physiology in 1999. She attended the University of California, Irvine for her Ph.D. studies in Environmental Health Science and Policy with an emphasis in Epidemiology/Public Health. She gave poster presentations and attended several professional scientific meetings including the Experimental Biology Meeting, the American College of Sports Medicine, and the American Thoracic Society. Additionally, Dr. Wilson played an integral role in the development of a new continuing medical education course offered by UC Irvine entitled A Practitioner’s Guide to Children’s Exercise in Health and Disease. As a faculty member for the course, she gave lecturers on: Introduction to Exercise Testing in Children; Exercise Field Tests; Sports Injuries in Children; and Laboratory Demonstration and Instruction in: i) Evaluation of Exercise-Induced Bronchoconstriction in Children, and ii) Maximal Exercise Testing with Gas Exchange Evaluation. Dr. Wilson’s work focused on examining the relationship between exercise and acute increases in the number of immune cells and pro-inflammatory mediators (PIM) in the peripheral circulation. Little is known about how exercise induced alterations in anti-inflammatory mediators (AIM) and the balance of both PIM and AIM may affect health.   She has also served as a guest lecturer at CSU Long Beach where she taught courses in exercise physiology. This subsequently led to her appointment there as an Instructor.

Elizabeth Gendy. M.D.  One of our goals of the training program is to identify and nurture the careers of physicians interested in working in the field of exercise science.  In this context, we were excited to have Dr. Gendy join our program. She finished her training in pediatrics shortly before joining our program. Dr. Gendy finished her two year commitment to our program in September 2011 and is now employed as a pediatric pulmonologist at Phoenix Childrens Hospital where she is specializing in patients who have exercise induced bronchospasms.  Additionally, she is a Clinical Assistant Professor at the University of Arizona Medical School.  As noted below in the abstract presented at the American Thoracic Society meeting in Denver, Dr. Gendy completed an extensive study that involved 145 children.  The goal of this study was to examine the effects of maturation on the leukocyte response to exercise in children.

Presentations
Evidence for a Maturational Effect of the Leukocyte Response to Exercise in Children. 2011 International Conference oftheAmerican Thoracic Society.

Clay Pandor, Ph.D.  Dr.  Pandorf received his Bachelor of Science  degree from the University of Delaware in Exercise Science in 1997.  He received a Master of Science degree from Boston University in Physiology in 2003 and subsequently completed his Ph.D. in Biological Sciences from the University of California, Irvine in 2008.  Dr. Pandorf subsequently joined the training program following the completion of his doctoral work.  Dr. Pandorf studies mechanisms of transcriptional regulation of myosin heavy chain genes in skeletal muscle.  Dr. Pandorf’s current training activities involve experiments to examine gene regulation and associated histone modifications in human soleus and vastus lateralis muscles in response to an unloading stimulus and in response to an exercise countermeasure.  RNA is being analyzed to determine if antisense RNA is regulated in a manner consistent with previous studies performed by Dr. Pandorf with rat models.  Chromatin Immunoprecipitation assays will be forthcoming to determine the presence and extent of histone modifications, i.e., gene activating modifications such as histone H3 acetylation, and repressive histone modifications such as trimethylation at H3 lysine 9 and  27, in the myosin and other  contractile genes that undergo alterations in transcription in response to different loading-state treatments with human subjects.

Dr. Pandorf presented data related to these studies at the 2012 Annual Meeting of the AmericanCollege of Sports Medicine, and the 2012 Annual Meeting of Experimental Biology. Dr. Pandorf’s work that was presented at the 2012 Annual Meeting of the ACSM was highlighted as “best-of-the­best.”  In April2o11, Dr. Pandorf was awarded the National Space Biomedical Research Institute’s Gravitational Physiology Award for Beginning Investigator, given by the American Physiological Society’s Environmental & Exercise Physiology (EEP) Section.  As noted above, Dr. Pandorf was offered an Assistant Professorship in the School of Medicine at the University of Mercer in 2012 and officially became a faculty member there in November 2012.  As part of our Pathway to Independence program, Drs. Baldwin, Adams, and Caiozzo worked with Pandorf during his last 3 months at UC Irvine to work on a R01-like grant proposal that was submitted to NASA.  Dr. Pandorf is currently waiting to hear the outcome of the review.